Could your IBS symptoms be a result of SIBO?

Around four years ago, my gut health became very problematic. At this point I had already spent years working on treating various parasites and imbalanced bacteria. Despite improvements in certain areas, I was starting to notice changes in my symptoms. My IBS flares were a little different, and things started to escalate.

I was in my second year studying Naturopathic Nutrition and I was starting to notice changes in my digestive symptoms, mood, skin, weight.  It was quite gradual at first but over the course of a year, things got really bad. I didn’t know what food to take to lectures with me as sitting all day just made everything so much worse. My gut felt uncomfortable with severe bloating, gas, indigestion, pain, mucous in my stools and just needing to go to the toilet far too frequently. I felt incredibly self-conscious and embarrassed to say the very least. I knew I had to get to the bottom of things, so ordered another stool test.The difference this time, I was going to be my own nutritional therapist.

What did my stool test say?

The results highlighted very low pancreatic elastase, a common symptoms of an underactive thyroid. It also highlighted some dysbiosis (imbalanced bacteria), how was this possible when my diet was so good? My results also highlighted key areas that could potentially signal the presence of SIBO.

These included high levels of:

Bam there it was! I could see a pattern starting to emerge. I knew I had to test for SIBO.

So, what is SIBO and why do so few doctors even know anything about it? 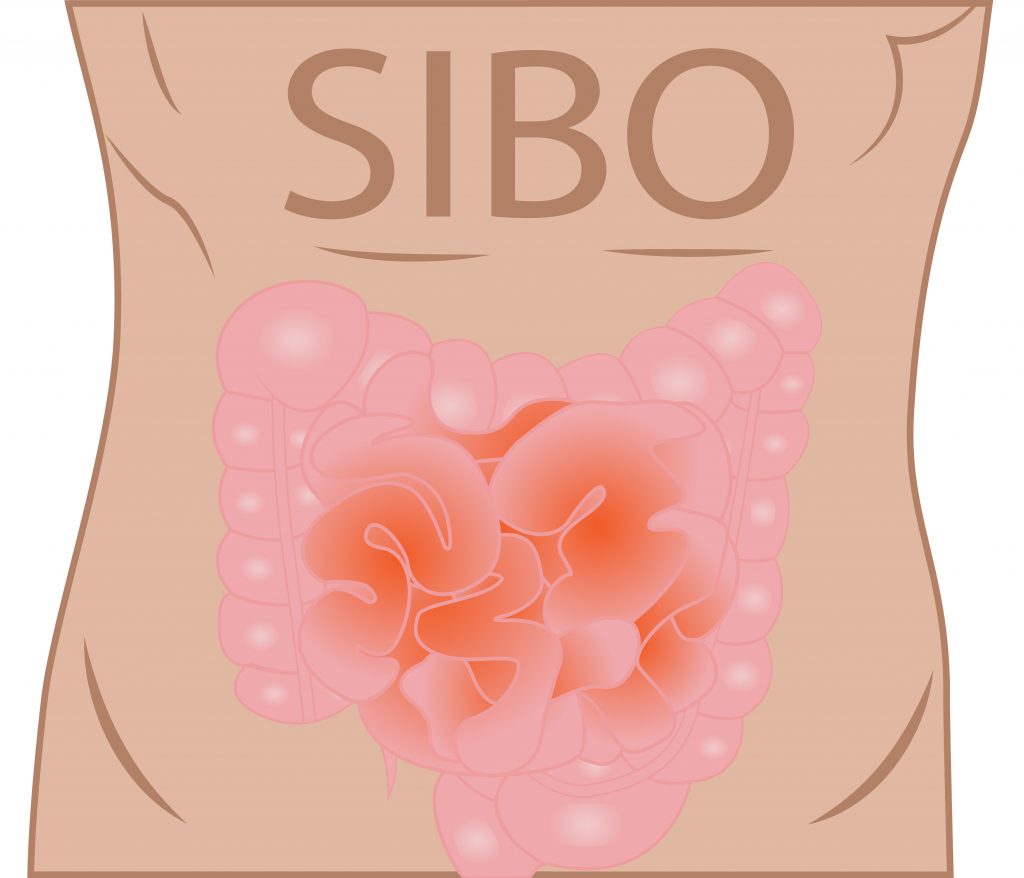 The colon is the region of the gut that holds most of our bacteria. The gut is home to 100 trillion different bacterial cells made up of at least 10,000 different species of known bacteria with more than 3 million genes (150 times more than human genes). The location of the bacteria is a really important aspect of their function. When the bacteria, for whatever reason, end up in the small intestine, this results in a condition known as Small Intestinal Bacterial Overgrowth (SIBO).

Small Intestinal Bacterial Overgrowth (SIBO) is therefore a condition where non-pathogenic bacteria that should reside in the colon, accumulate in the small intestine.

In SIBO the main issue is the LOCATION of the bacteria and NOT the TYPE of bacteria!! 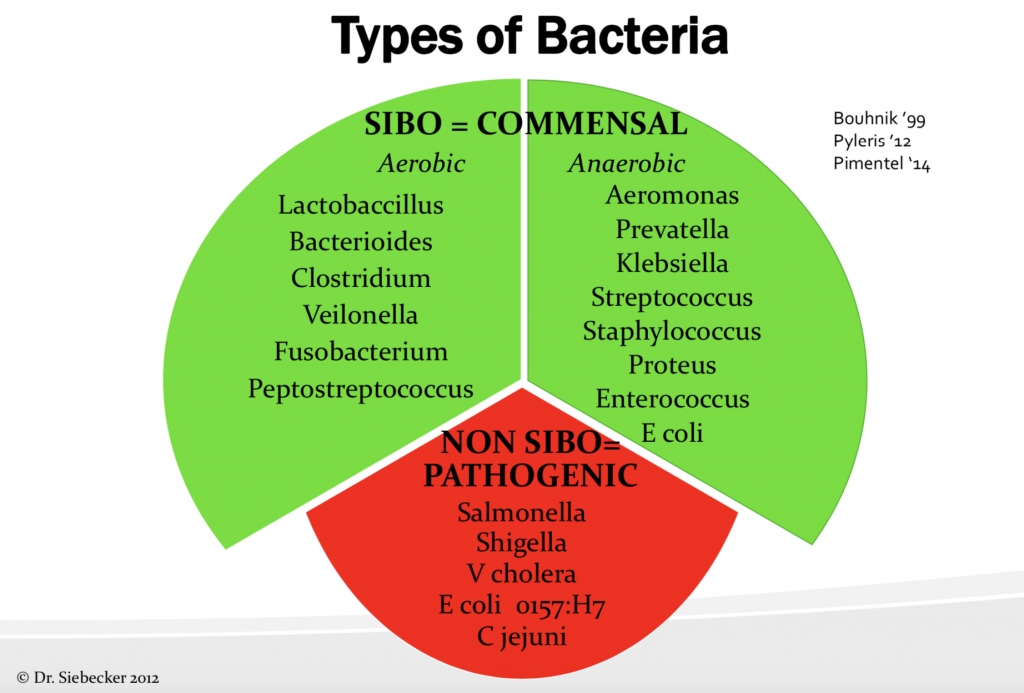 From the symptoms below, it is easy to see why so many people might be diagnosed with IBS, when in fact they have SIBO. In this post about IBS, I explained that an average of 60% of people with IBS actually have SIBO. Making SIBO the main cause for IBS. Maybe you have been diagnosed with IBS or have self-diagnosed with IBS. Maybe you have chronic ongoing gut pain or bloating or acne and not sure what is causing it. In my time in practice and through my own personal experience with SIBO, I have come to understand that there is currently very little support for SIBO within the conventional health care system. Worse still many are unaware of the condition or don’t believe it exists.  I am really hopeful that this will start to change in the near future. 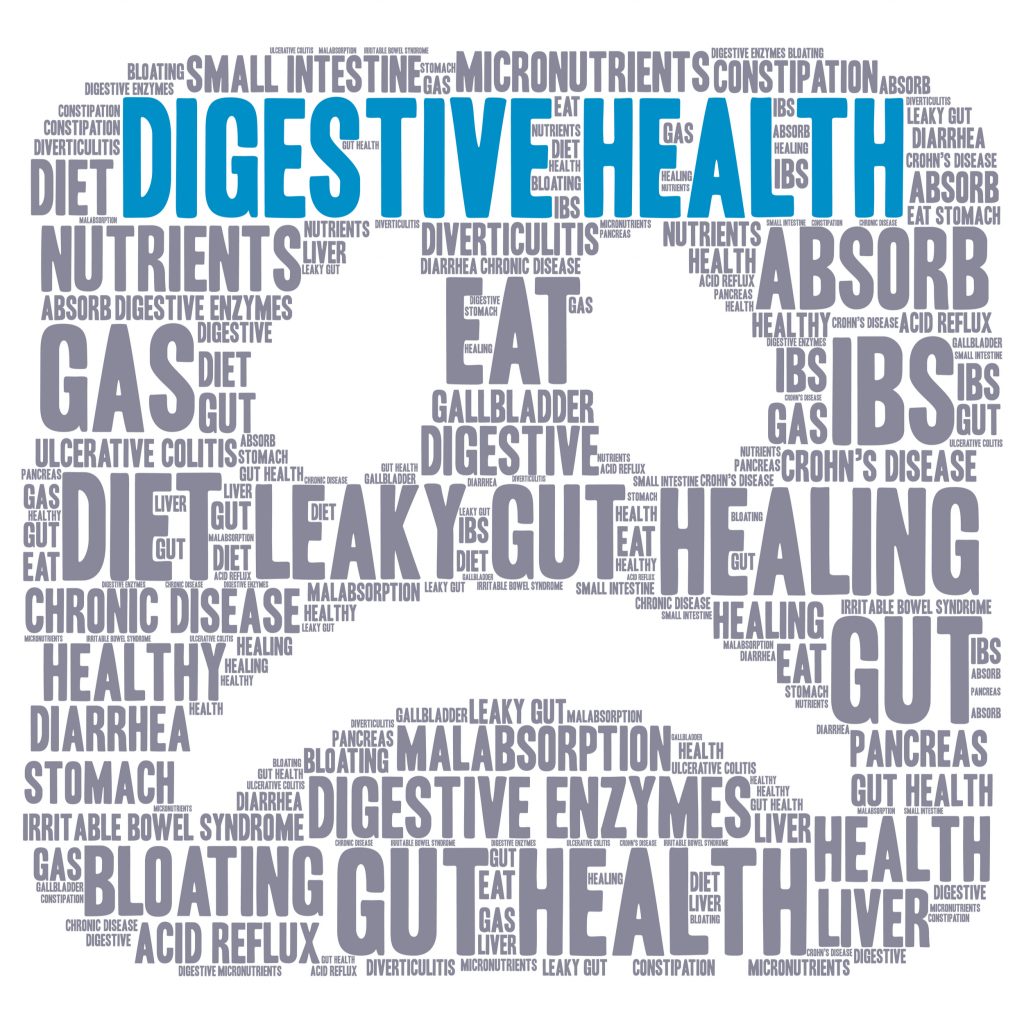 So why does SIBO symptoms present the way that they do?

When nutrients bypass absorption in the small intestine, it can lead to various complications. These include fat malabsorption, which leads to fatty stools as the fat exits the body, rather than being absorbed. Furthermore, it also impacts the absorption of fat soluble vitamins A, D, E, and K, thereby creating nutrient deficiencies, immune dysfunction, and weight loss.

When carbohydrates bypass absorption in the small intestine and are left in the lumen or either the small or large intestine. The carbohydrates then get fermented (eaten) by bacteria, which creates gas. Carbohydrates are the primary food for bacteria. The bacteria make either methane, hydrogen or hydrogen sulphide gas.

The carbohydrates sitting in the intestine have an osmotic effect drawing water in, thereby causing bloating. Once the carbohydrates are fermented these gasses cause bloating, pain, flatulence, belching, nausea, diarrhoea and or constipation. This is one of the main reasons why it is imperative to reduce carbohydrate intake when treating SIBO.

There is a very strong correlation between SIBO and anxiety and depression. The reason for this is that the gastrointestinal system sends signals to the central nervous system (CNS) to trigger mood changes. This is why the gut is known as the second brain. These signals can then result in symptoms of anxiety, and mood alterations, that is frequently present in SIBO.

Bacteria in the small intestine not only make, but also use vitamin B12. B12 deficiency can lead to weakness, fatigue, tingling and numbness in your hands and feet and also lead to mental confusion in advanced cases. The bacteria also use iron and low ferritin levels or anaemia can signal SIBO.

This is one of the reasons why SIBO is associated with inflammatory conditions such as Fibromyalgia, Chronic Fatigue Syndrome, Autoimmune conditions, psoriasis, acne, acne rosacea, thyroid, diabetes and more. 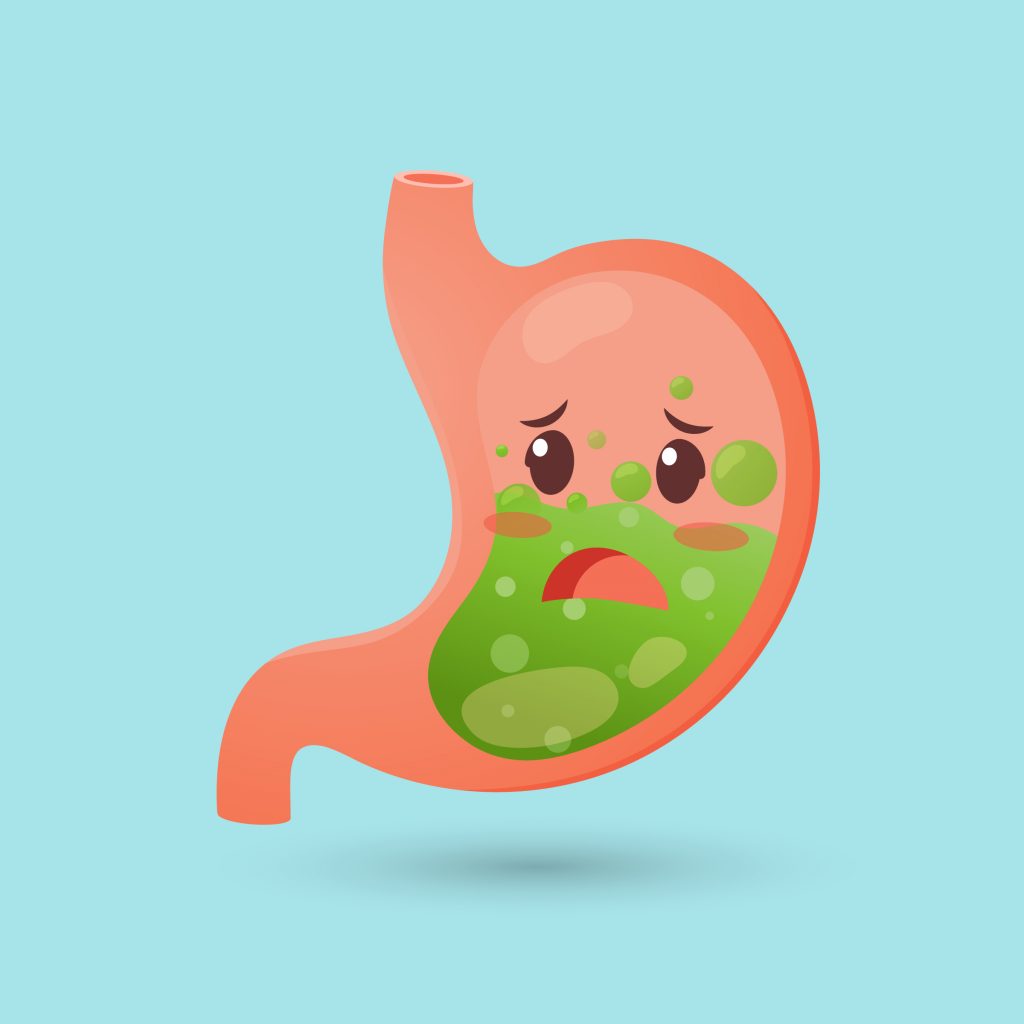 The hydrochloric acid in your stomach kills 99.9% of incoming bacteria entering from the mouth and nose. Low stomach acid can lead to bacterial overgrowth in the stomach that can spill over into the small intestine. Providing your migrating motor complexes (MMC) work well, it should clear up the spill-over. Problems set in when MMC is weak or failing.

Factors that can impact stomach acid are:

This is a type of wave movement/motion or peristalsis that occur only in the small intestine. It occurs every 90-minutes during periods when you are NOT eating. Eating turns off MMC. This means that if you are snacking all long, you are directly impacting your MMC, which can ultimately lead to SIBO.

The function of MMC is to clear bacteria, indigestible food and cellular debris and move it into the colon.

Factors that can impact MMC are:

Bile acid and enzymes help to kill and arrest growth of bacteria. Poor bile flow and poor enzyme secretion is associated with poor thyroid function, therefore meaning that it can be your underactive thyroid leading to SIBO.

Factors that can impact bile and enzyme secretion:

Under-active thyroid, not chewing your food, eating on the go, drinking too much fluid with meals, stress, pancreatic insufficiency (cancer or low output), poor bile flow, processed diet and more.

The ileocecal valve connects the small and large intestine. Its main function is to prevent backflow. When this valve is not working properly bacteria can flow back into the small intestine and accumulate.

Obstruction or distortion of the intestines

Individuals with a history of abdominal or pelvic surgery and/or endometriosis or trauma might need to be aware that it can predispose SIBO. Scar tissue and/or chronic inflammation, as seen in conditions like Crohn’s, Diabetes, Coeliac Disease, can lead to the obstruction or distortion of the intestines. Thereby impairing the enteric nervous system’s migrating motor complexes, which can lead to a greater build-up of bacteria in the small intestine and predispose SIBO.

To test for SIBO you complete a breath test after drinking a lactulose or glucose sugar solution. The function of the test is to measure the hydrogen and methane gas produced by bacteria in the small intestine that has diffused into the blood, then lungs for expiration.

They measure and graph the gas over a 2-3 hour period. The timing gives information around the location of the bacteria. An earlier rise indicates small intestine, where a later rise indicates the large intestine.

It is an easy test that can be performed at home. In preparation for the test you need to follow a diet limited  to meat, fat and no carbohydrates for 24-48 hours prior to testing. The extended time depends on whether you suffer with constipation.

Testing is a really important part of diagnosing and treating SIBO. Whilst you can sometimes get false positives, as a SIBO practitioner, I always work with the symptoms that my clients present with and use testing as a guideline on how to treat. In my own personal journey with SIBO, testing enabled me to understand how to target my treatment and retesting enabled me to understand just how successful the treatment round has been and whether I need to change things or introduce new antimicrobials. 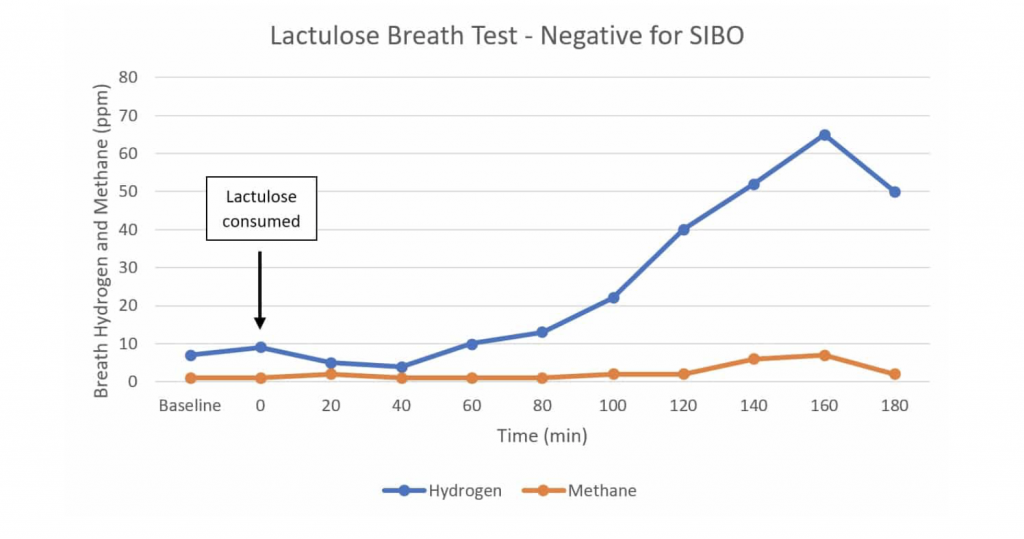 Some of the key benefits of testing:

How did my story end?

As it turned out my SIBO results were very high and in the end I required several rounds of treatment. It took me over a year to put my SIBO into remission and I have now been symptom free for over two years. Not having SIBO has made such a significant difference to my life and has enabled me to include a much greater variety of food back into my diet. I can now eat food without gas (minutes after eating), severe bloating and frequent pain.

In my recent post on Instagram, I share a case study of a client who had SIBO and the impact that it had on her Acne Rosacea. The results we had in four months were incredible and after years of visiting the doctors, no one once suspected SIBO. She is still maintaining a healthy lifestyle and her skin is now so much better.

What to do next?

If you are unsure whether your IBS is actually SIBO, or whether SIBO is at the root of your acne or weight loss, fibromyalgia, thyroid, low B12 or anaemia, get in touch. Your life really doesn’t have to be miserable. Very often you can make significant improvements in a short space in time. I really understand just how challenging the journey can be and I have years of experience of being in the client’s seat.  I know what works and what doesn’t and as a result, results tend to happen quick on the whole.I am here to support you through the process and guide you along the way. You can contact me to book in for a free 15-minue discovery call to see how I can support you.

Maybe you have also got a SIBO success story to share or just unsure what to make of it all. If so feel free to leave a comment below.